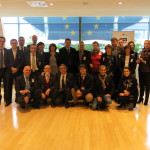 After its constitution on December 2nd, 2013, the new European Grouping of Territorial Cooperation “Cities of Ceramics” (AEuCC in short) held the Foundation Assembly in Brussels on January 31st, 2014, in conjunction with the session of the Committee of the Regions of the European Union. In the Foundation Assembly of AEuCC, Antoine Di Ciaccio (Aubagne, France) was elected as President, Stefano Collina (Faenza, Italy) as Vice President and Giuseppe Olmeti (Faenza, Italy) as Director of Projects.