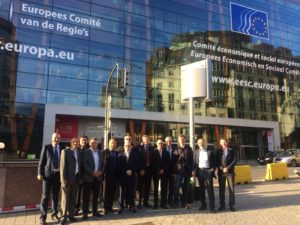 The General Assembly of AEuCC was held in Brussels on October 9th, 2017, in the framework of the European Week of Regions and Cities, an annual four-day event during which cities and regions showcase their capacity to create growth and jobs, implement European Union cohesion policy, and prove the importance of the local and regional level for good European governance.

The President, Stefano Collina, and Giuseppe Olmeti, General Secretary and Projects Director, presented the final results and the achievement of AEuCC with regard to year 2016; in particular, they presented the Erasmus+ project “Cerasmus”, recently approved and co-financed by the European Commission, in which AEuCC is one of the partners and that will officially start in the next weeks.

Furthermore, the Assembly discussed the programmes and the budget for year 2018, when new members will officially enter into AEuCC: owing to this, AEuCC will be the largest European Grouping of Territorial Cooperation with interregional characterization (i.e. not dedicated to cross-border cooperation); in other words, the most “European” among EGCTs.

“This Assembly”, Senator Stefano Collina comments, “confirms the positive consolidation of the work and results of AEuCC: since the beginning of our activity, we have pursued the two main oblectives of finding European funds for concrete and important projects and of proceeding with the enlargement of the members of the EGCT. Today, in Brussels, we celebrate the launch of the first project, an Erasmus+ KA2, awarded by the European Commission, and consolidate the ‘entrance path’ for 4 new members from Germany, Poland, Czech Republic and Portugal. Further projects are in the process of being presented and in the evaluation phase, and we expect to find ourselves, in the next Assembly, more structured and committed to new and different operational actions”.