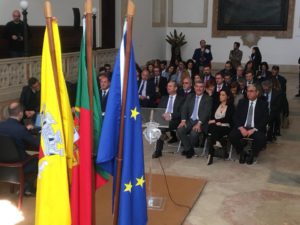 On April 16th and 17th, 2018, important meetings were held at the National Palace of Mafra, in Portugal, which involved the European Grouping of Territorial Cooperation “Cities of Ceramics”.

After a long and delicate work of promotion and technical preparation, which lasted over two years, the foundation ceremony and the signing of the Statute of the Portuguese Association of  Cities of Ceramics (AptCC) took place, with the participation of the 14 Portuguese Cities of Ceramics and the presence of an important delegation of Italian, Spanish, Romanian and German cities of ceramics.

The Association aims to promote and preserve Portuguese ceramics and allows Portugal to apply for admission to the European Grouping AEuCC. The Association will defend, enhance and disseminate cultural and historical heritage; promote the exchange of experiences between members, artistic creation and the diffusion of traditional and contemporary ceramics; promote cooperation and increase training programs ensuring the continuity of the ceramics sector.

The solemn signing of the Charter was followed by the inauguration of an exhibition of 28 works, 2 for each city, carefully collected by the director of AptCC Josè Luis da Silva, an exhibition that will be itinerant throughout 2018 in the cities adhering to AptCC, and from refreshments during which each Portuguese city has exhibited and offered for tasting products of its territory, demonstrating how the territorial promotion of excellent products can be combined with qualifying synergies.