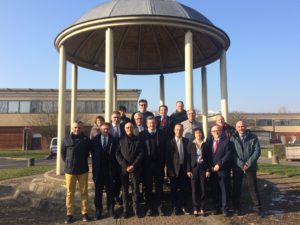 On Saturday, January 21st, 2017, a very important Assembly of the European Grouping of Territorial Cooperation “Cities of Ceramics” – EGTC AEuCC was held in Paris, in the premises of Maison&Objet, the most important international trade fair dedicated to applied arts, lifestyle, decoration and design.

Three years after its establishment, the European Grouping has enlarged and from a project that involved as founding members Italy, France, Spain and Romania – with their respective national associations of Cities of Ceramics – it has become a platform that comprises a larger part of Europe: in fact, the Paris assembly marked the entry into AEuCC of two Associations of Cities of Ceramics recently created in Germany and Poland, and in the near future it will be also formalized the entry of similar associations in the process of creation in Czech Republic and Portugal. 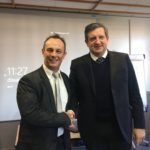 The assembly was also the occasion for the change of Presidency: after the end of the mandate of Philippe Amy, representing France, the Italian Senator Stefano Collina (President in charge of the Italian Association of Cities of Ceramics – AiCC and former Vice President of the European Grouping) was elected by acclamation as the new President. He will take care of launching the European Grouping towards new challenges, both in the direction of a further enlargement and of updating programmes and projects.

“It is a prestigious commitment for the coming years”, Stefano Collina says, “which marks the esteem for the work and the actions developed by the Italian Association of Cities of Ceramics. I will work in particular to bring the theme of ceramic handicraft at the heart of European institutions: here at Maison&Objet we have appreciated once again the high quality and the important dimension of European Ceramic Art and Handicraft within the applied arts sector. At the assembly, we registered a special appreciation for the work we are developing with the Italian Association of Cities of Ceramics: all nations, in fact, decided in 2017 to launch as pilot project the event ‘Good Morning Ceramics’ (Buongiorno Ceramica in Italian) in their countries, giving life, on the next 2nd, 3rd and 4th of June to a European (and not only Italian) week-end of Ceramic Art and Handicraft”. 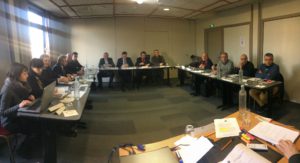 AEuCC assembly also approved the programme for 2017, the development of which is entrusted to an internal technical team composed by the directors of the national associations. Giuseppe Olmeti, re-appointed as Coordinator of the technical team, says: “It is a complex and ambitious work, that includes the involvement of all national associations belonging to AEuCC, oriented in large part to the presentation of projects within European programmes (INTERREG Europe, Erasmus +, Creative Europe, ENI-MED), but also directed to technical actions (such as Geographic Indication recognition of non-agricultural products or the recognition of Ceramics as UNESCO intangible heritage) involving a delicate work of institutional relations”.

At the assembly, it was also approved the continuation of the work for a further enlargement of AEuCC members, which includes the development of contacts with Cities of Ceramics of other nations, of the European Union (especially Slovenia, Hungary, Bulgaria, Lithuania, Denmark), but also non-European (Switzerland, Russia, Turkey) and of the Far East (China, Japan and Korea).