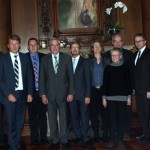 On November 21st, 2015, the German Association of Cities of Ceramics (or German Association or AgCC) was officially constituted in the city of Mettlach, near the border with France and Luxembourg, at the Saareck Castle, home to one of the most important world-porcelain companies, the “Villeroy & Boch”.

AgCC is formed by 8 cities (Brachttal, Duingen, Hoehr-Grenzhausen, Kellinghusen, Landshut, Mettlach, Römhild and Siershahn) which should become 15 within a few months, having declared an interest some important cities as Velten, Rheinberg, Diessen, Selb and Meissen, the European city where at the beginning of the 18th century the first production of European porcelain began.

The Mayor of Hoehr-Grenzhausen, Michael Thiesen, was elected President unanimously.

Pictures: representatives of German cities of ceramics at the foundation assembly of AgCC.