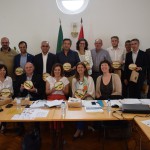 At the meeting held on June 16, 2016 in Viana do Alentejo, it was given the final step to the creation of the future Portuguese Association of Cities and Villages of Ceramics (AptCC), which will have as founding members the municipalities of Alcobaça, Aveiro, Barcelos, Caldas da Rainha, Ilhavo, Mafra, Montemor-o-Novo, Obidos, Redondo, Reguengos de Monsaraz, Tondela, Viana do Alentejo, Viana do Castelo and Vila Nova de Poiares.
The project of statute, drawn up at the meeting of Aveiro in March 2016, has now been concluded with the unanimous adoption of the location of the headquarters of the Association in Caldas da Rainha and the approval of the annual fee for the participating municipalities, which will be identical for all.
The next bureaucratic steps will be completed by the end of September 2016.

The main objective of the future Portuguese association will be the safeguard, the enhancement and dissemination of Ceramics cultural heritage and history as well as the exchange of experiences among members, particularly in terms of heritage conservation; the development a connection with Ceramics at the level of historical tradition, cultural heritage or creative (craft/industrial production of historical tradition or creative).
It further aims to promote artistic creation and dissemination of traditional and contemporary ceramics and encouragement of exchanges and cooperation relations between the municipalities associated with national or European network.
Among the initiatives that it intends to launch, there will be the extension at European level of the annual event held in Italy in the first weekend of the month week of June – “Good Morning Ceramics” – in which they carry out activities, exhibitions, workshops, open days of workshops, etc. in all cities adhering to the network , with very wide media coverage.

The fourteen municipalities founders of the Association in the future will invite more municipalities throughout the country, where there is or has been a pottery tradition, or that today are a source of creative and innovative production of ceramics.