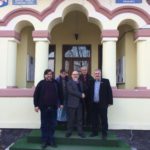 The meeting took place in Horezu, city situated in the South West Oltenia region, not far from its capital Craiova. 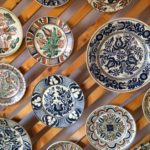 Horezu is considered the capital of the Romanian ceramics: it established and chairs today the “ArCC”, grouping 15 cities, most of which of small dimension but with an old and important ceramic tradition, extending year after year the number of members and activities of the Association.

The Mayor of Horezu, Nicolae Sardarescu, and the director of ArCC Eugen Savulescu discussed and planned, with the AEuCC Secretary General and Projects director Giuseppe Olmeti, about the possibilities and availability of the Romanian Association Cities of Ceramics to participate in European programmes projects in preparation (such as “Creative Europe” – the former “Culture” – and as well, through West Oltenia Region, to “INTERREG Europe”).

ArCC showed interest in further projects in progress and in particular to the diffusion in Europe of the initiative “Good morning Ceramics!”, initiated by AiCC (Italian Association of Cities of Ceramics) and held every year in Italy in the first weekend of June, and to the participation to the worldwide network promoted by Jingdezhen, the Chinese city world capital of porcelain. 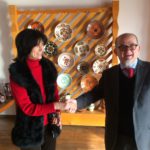 The meeting concluded with a tour, guided by the curator Loriana Todea, to the Museum of Popular Romanian Ceramics located in the same premises of the Municipality of Horezu. 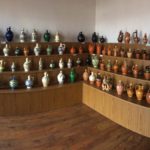 “It is a great joy to have found confirmation of continuity and enthusiasm for participation by the Romanian friends – commented AEuCC officer Giuseppe Olmeti – mainly in this moment, waiting for some important steps that AEuCC will carry on in 2017, starting with the appointment of the new President on January 21 Assembly, that will be held in Paris, the entrance in AEuCC of the newly formed ceramics associations in German, Poland and Portugal, and the presentation to EU Commission of projects under Creative Europe, INTERREG Europe and Erasmus+ programmes”.