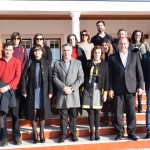 Representatives of the municipalities of Mafra, Caldas da Rainha, Alcobaça, Tondela, Reguengos de Monsaraz, Redondo, Ilhavo, Barcelos and Aveiro, in a meeting held in the city of Mafra on January 13th, 2016, decided to start the works for the creation the “Portuguese Association of Cities of Ceramics”, with the strategic objective of promoting the towns and villages of Portuguese ancient ceramic tradition (both cultural and productive) and to promote the artistic creation and dissemination of contemporary ceramics.

The scope of this association corresponds to the territory of the Portuguese State (mainland and the autonomous regions of Madeira and the Azores), with the aim of developing relationships and partnerships with similar associations and subjects in Europe and in the rest of the world.

In the upcoming weeks, a committee composed of representatives of Portuguese Municipalities will develop the tools necessary for the legal implementation of the association, to be presented in plenary to all Portuguese municipalities that develop a connection with ceramics at the level of historical tradition, cultural heritage or creative (craft/industrial production of historical tradition or creative, including the various materials, porcelain, stoneware and majolica included) who can join and participate in the actions and activities of the association.

It is important to underline that in Portugal (including Azores and Madeira), given its wealth in clay, there are around one hundred cities with a tradition in ceramic craft and/or industrial production, with historical roots of several centuries, which may be involved in this association and develop activities for the promotion of such historical and cultural roots.

The founder Cities – together with other centres of ancient ceramic tradition that in time will join – undertake in the coming months to formalize and give an appropriate legal status to the association and to participate in European Group of Territorial Cooperation City of Ceramics “AEuCC”, which already is formed by the corresponding associations in Italy, France, Spain, Romania (the newly associations established in Germany and Poland are about to join).

“We are very pleased with this initiative by the Portuguese Cities, this is great news for European ceramics,” stated Senator Stefano Collina, President of AICC and Vice President of the European Group AEuCC (of which he was one of the founders) . “The role of AICC in achieving this important step towards the establishment of the Portuguese has been crucial, particularly owing to the recognition of technical leadership entrusted to our Italian Association and carried out by the coordinator of AiCC, Mr. Giuseppe Olmeti, which promoted directly contacts with the Portuguese Cities and Directors. An important towards the enlargement of a Ceramics European Union and of the body representing this union, AEuCC, which could pass, during 2016, from 4 to 8 members and from 100 to more than 150 European cities represented”.

Picture: representatives of all the municipalities present at the first meeting for the establishment of AptCC.