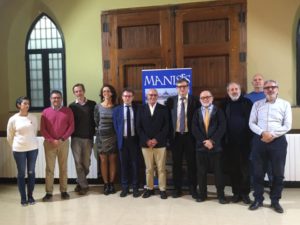 On November 22nd, in Manises (Spain), the assembly of AEuCC members took place, with the participation of 15 people, coming from 5 European countries (Italy, Spain, Czech Republic, Portugal, Poland), who took stock of the activities and projects and made important decisions. 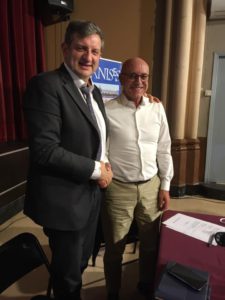 Senator Stefano Collina has officially concluded his mandate as President of AEuCC, after 3 years of intense work in which several important projects started, including Cerasmus+ (Erasmus+ programme of the European Union) and CLAY (Interreg Europe programme). The Deputy Mayor of the City of Manises, who also holds the position of President of the Spanish Association of Cities of Ceramics (AeCC), was therefore elected new President of AEuCC, while Massimo Isola, Vice Mayor of Faenza and President of AiCC, was elected Vice President of AEuCC. Giuseppe Olmeti from Faenza was confirmed, for the fourth consecutive two-year period, as Secretary General and Projects director, while Oriol Calvo from Spain was confirmed as Deputy Secretary and Administrative Director. 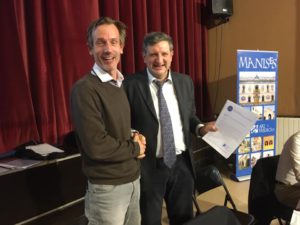 The conditions for an enlargement of the participants in the European grouping, founded by the Italian, Spanish, French and Romanian associations of cities of ceramics, have also matured: the Czech Association of Cities of Ceramics (AczCC), for which President Nikola Seko was present in Manises, has officially ratified the entry into AEuCC structure and specific requests for membership have been submitted by the German (AgCC) and Portuguese (AptCvC) associations.

The assembly took important decisions on the current European projects (Cerasmus+, CLAY and the new Women & Art) and on those in preparation (Cerasmus +/2, Skill alleances, Arginet/2). 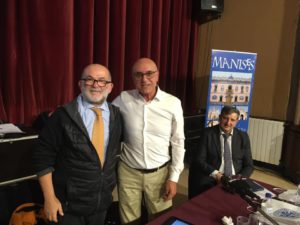 At the conclusion of the meeting the new President Xavier Morant proposed Stefano Collina as President of the World Ceramics Ambassadors, who was elected by acclamation and with a standing ovation by the assembly.

In the days preceding the meeting, the final event of the Cerasmus+ project was also held in Manises (see related post): after two years of intense transnational work, which involved 6 European countries and 8 partners, the project ended with the full accomplishment of the objectives: the ceramic sector training needs were successfully assessed, and as a result the partnership produced a set of trainings, including specific curricula and reference educational resources for initial and continuing VET, focused in work based learning, aimed at letting ceramics professionals gain transversal and professional competences for the improvement of sector “value chain”, of models and means for valorization of urban environment, and for supporting business start-up. 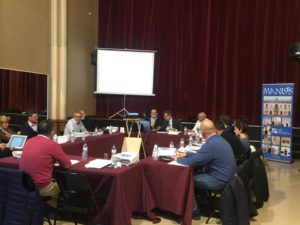 The following day, the Assembly of the Spanish Association of Cities of Ceramics was held, with the election of Maria Jesús Pérez Lozano, of Talavera de la Reina, as new President.

“I am very happy to have been elected as Vice-president of AEuCC”, comments Massimo Isola. “For years I have been working with passion and continuity so that the municipalities can make concrete contributions regarding the promotion and development of ceramic production. We are achieving tangible results and compared to a few years ago I believe that the ceramic system is more consistent and effective in the public debate. In our cities attention to majolica and porcelain has grown as well as curiosity and the desire to innovate. We live in complex times for the Italian artisan system but I am convinced that there are encouraging signs that we must feed. I will work to reinforce our team, to keep different cultural and geographical contexts together and to stimulate the leading role of our administrators and our ceramists: in Faenza, in Italy and in Europe, we are close-knit and confident, we have many projects, both in our cities and in our international networks, which we must carry on with intensity. We are already working to realize new ideas, recover new resources, apply to national and European projects. An exciting challenge, which allows us to find more authentic and profound relationships with our identities and, at the same time, stimulates us to open up, to confront us, contaminating our convictions and our stories with external environments. The 46 Italian ceramic cities and the nearly 200 European cities are moving towards new goals: this element is positive and not obvious, the result of a community that sees in ceramics an element of union and not of division “.

“AEuCC continues on his path of consolidation and expansion,” says Giuseppe Olmeti. “It is an experience that from an institutional and administrative point of view has become increasingly operational, achieving concrete results in various fields (promotion, events, training, economic development, etc.), but above all consolidating the relative partnerships, both the national and the European associations, in relationships of collaboration and synergy as well as of friendship, and giving life, in particular in Faenza, to an operational structure that now involves over ten operators, including direct collaborators, professionals and consultants, strongly oriented to achieving concrete objectives: in fact a spin-off of an efficient and organization of services “.