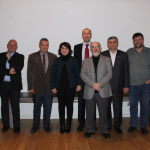 On the 2nd of December, 2013, the constitutive documents of the European Grouping of Territorial Cooperation (EGTC) “European Association of Cities of Ceramics – A.Eu.C.C.” have been signed in Barcelona, in the offices of Artesania Catalunya: this new subject is formed by the National Associations of Cities of Ceramics of Italy, France, Romania and Spain, which group together more than 100 European cities of ancient ceramic tradition.

The EGTC is a European legal instrument designed to facilitate and promote cross-border, transnational and interregional cooperation.

The new organisation will be based in Spain, precisely in Totana (in Murcia region), whereas the Presidency will be given, for the first two years, to France (Aubagne) and the Technical Direction to Italy (Faenza).

In the occasion of the foundation of this new subject, a representation of the bodies and association involved met together: the Presidents of three National Associations, Antoine Di Ciaccio (France), Isabel M. Sánchez Ruiz (Spain), Fartat Ilie (Romania) and the Vice President of the Italian Association, Claudio Gheller, Councilor of the City of Nove (representing Senator Stefano Collina, who could not join the meeting for Parliamentary commitments).

In the meeting, the technical coordinators and experts from the same associations were also present: Charles Fillit (France), Oriol Calvo (Spain), Giuseppe Olmeti (Italy) and Eugen Savulescu (Romania). José Antonio Moreno Andreo, Administrative Coordinator of the City of Totana, took part in the meeting too: he will be Accounting Comptroller of the new EGTC.

The activity of the news EGCT will start on January 1st, 2014, once the documents have been registered at the Spanish Ministry of Foreign Affairs. An public official presentation will be held in Bruxelles, at the end of January 2014, in conjuction with the session of the Committee of the Regions of the European Union.

In the meeting held on 2nd December 2013, the plans for 2014 of the “EGTC Cities of Ceramics” have been established too. The activity in the filed of ceramics will be focused on four main themes: economic development, tourism and cultural development, education and environmental sustainability, with the purpose of presenting projects and research funds for these areas of work at the European level.

The EGTC will be a light structure, almost “virtual”, in which the human resources already working in the national associations will connect and bring together their skills and energies to realize on a wider scale their work.

From an institutional point of view, there will be two assemblies per year and a biennial Conference of the Majors of the involved cities (almost one hundred), which will be held during Argillà Italia in Faenza (Italy).

The European Grouping of Cities of Ceramics is one of the few existing thematic EGTCs (in this case, about ceramics), whereas normally EGTCs are the Cross-Border Macro-Region: for this specific reason it has received explicit appreciations from the National Governmental Representatives during the presentation meetings held in Rome in Summer 2013.

Senator Stefano Collina, President of the Italian Association of Cities of Ceramics, expresses his approval for the creation of the EGTC and for the vision of this new subject: “The path for the creation of the EGTC has involved our national associations for almost 2 years, and now, in a very complex moment for National and European economy, we start a new technical course: it’s an important responsibility, which will produce positive results, as we have already obtained with similar projects in the last years. I’m referring, for instance, to Argillà Italia and to the European Project ARGINET, for the cultural and economic development of ceramic in Europe”.